Its alignment shaped by steep hills rising up from the banks of the Galena River, Main Street presents a nearly unbroken line of 140 buildings from the 19th century that help Galena live up to its reputation as "the town time forgot." Long a haven for Chicago residents and a destination for more than a million visitors each year, only cosmetic changes have affected the architecturally consistent and unified three- to four-story buildings that were reconstructed along Main Street following fires in the 1850s. Occupying these buildings today are a wide variety of businesses including antique stores, art galleries, restaurants, wineries, and a microbrewery. 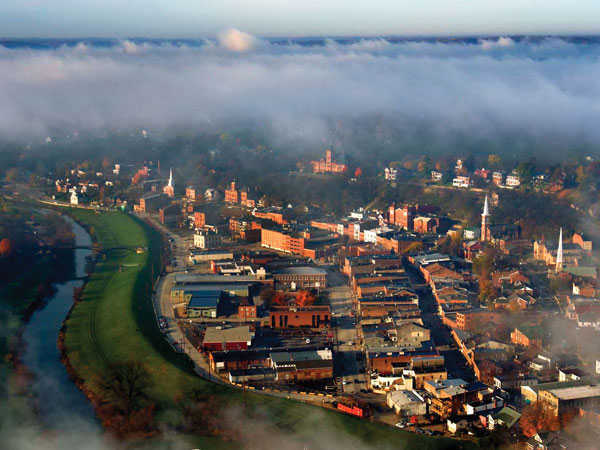 Main Street, third from left, winds with the topography of the bluffs overlooking the Galena River. Floodgates and levees protect Main Street and the town's historic and commercial district. Photo courtesy of George Bookless Studio.

Before tourists and artists put Galena on the map, Ulysses S. Grant launched his 1868 presidential campaign from the DeSoto House Hotel at 230 South Main St. Other famous guests of the hotel were Abraham Lincoln and Stephen A. Douglas.

The historic architecture and character of Main Street haven't kept Galena and its downtown problem-free, however. A proposal in 1970 to raze 22 downtown buildings spurred residents to resoundingly defeat the idea and begin rehabilitation efforts that eventually included the burial of overhead cables, replacement of sidewalks, and construction of pedestrian walkways to off-street parking that serves downtown.

The result is a unique street where one can cross over and back between the 19th and 21st centuries. 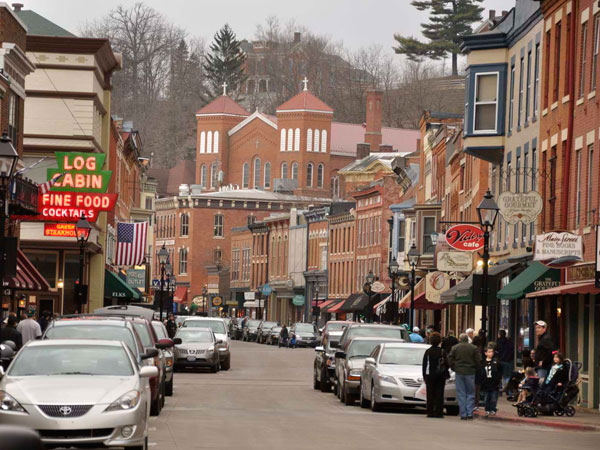 A variety of shops and restaurants line both sides of Main Street, while mansions perch on the hillsides above. Following fires in the 1850s, most of Main Street's structures rebuilt of red brick in the Federal style. This unique architectural consistency is protected by one of Illinois's first historic preservation ordinances. Photo courtesy of George Bookless Studio. 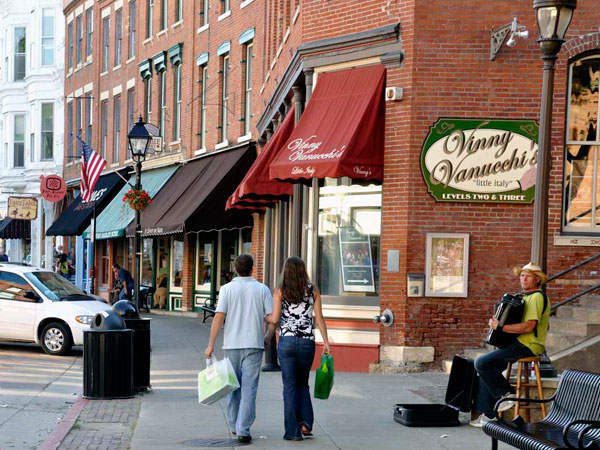