There was a time, not too long ago, where "you took your life in your hands just to cross Santa Monica Boulevard," said Jeff Prang, a member of the West Hollywood City Council. Today, despite 46,000 daily vehicle trips, this reconstructed main street embraces pedestrians, linking them to neighborhoods, landmarks, and traditions. A stroll along this iconic street, part of the legendary Route 66, yields distinct experiences. The west end is the center of the city's renowned lesbian-gay-bisexual-transgender (LGBT) community and nightlife. The eastern portion, a celebrated gathering place, runs through a culturally rich neighborhood of Russian-speaking immigrants.

Thirty-eight city blocks (2.8 miles) between Los Angeles and Beverly Hills, from La Brea Avenue to the east and Doheny Drive to the west. 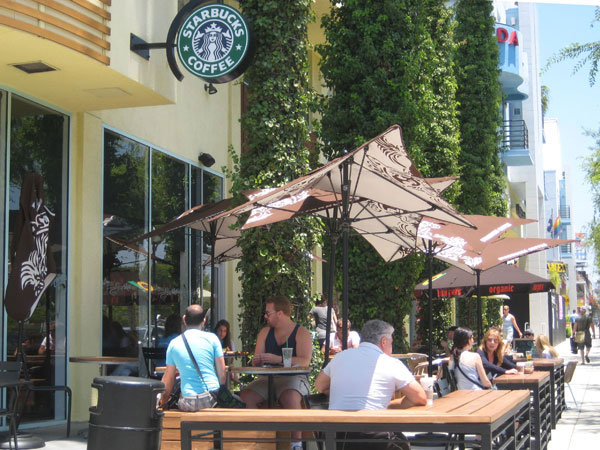 West Hollywood city ordinances encourage sidewalk cafes, which have been instrumental in creating a pedestrian-friendly atmosphere along Santa Monica Boulevard. Photo by City of West Hollywood.

Some 600 businesses are scattered along the boulevard that features seven historic structures, including Irv's, a 1946 burger stand, and several parks.

Santa Monica Boulevard in West Hollywood is a reflection of the city's residents. The West Hollywood Memorial Walk pays tribute to those who have died from HIV/AIDS. Municipal flagpoles proudly fly rainbow flags next to the American flag. Ethnic grocery stores, Russian restaurants, and delis cater to emigres from Russia or Ukraine, who make up nearly 20 percent of the city's population.

The boulevard's festive atmosphere — enhanced by colorful signage — makes it ideal for annual Russian, Halloween, and LGBT pride festivals that take place here. Despite being a magnet of activity 24 hours a day, seven days a week, the boulevard is kept in pristine condition by a program of intensive street cleaning and ongoing maintenance.

When West Hollywood incorporated in 1984 the boulevard was a major eyesore. To bring back the street, the city began by burying utility lines and tearing up abandoned rail tracks in the median. In 1997, residents embarked on an 18-month planning process. The Santa Monica Boulevard Master Plan represented their collective desire for a culturally expressive street that acknowledged the area's historic heritage and realized its potential as a vibrant, pedestrian-oriented urban boulevard.

After the City of West Hollywood acquired control of the state-owned boulevard from the state department of transportation in 1999, reconstruction commenced. Two years, 1,200 trees, and $34 million later, Santa Monica Boulevard reopened as a complete street, a multi-modal thoroughfare with thriving businesses that serve a diverse population. The redesigned street and several adjacent structures, including a new library and affordable housing building, include green features.  Santa Monica Boulevard also incorporates large amounts of public art, and new and proposed parking regulations will improve the economic viability of businesses located along this historic right-of-way. 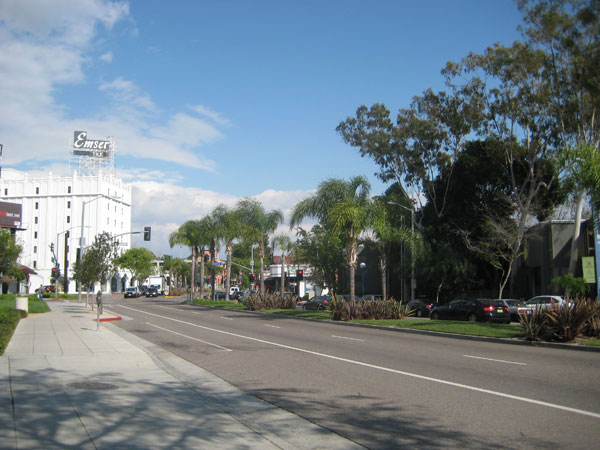 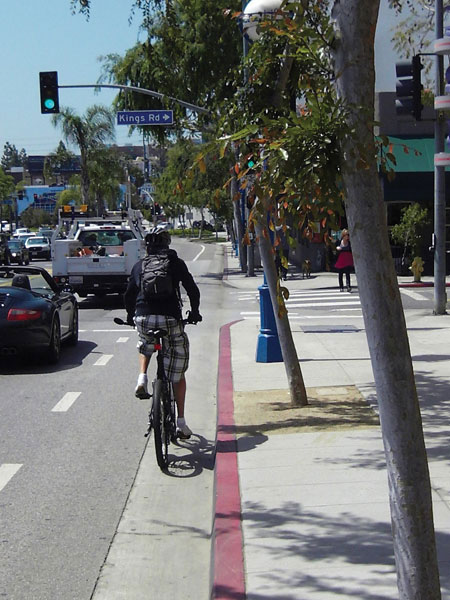 Bike lanes along Santa Monica Boulevard are heavily used by both commuters and recreational cyclists. Photo by City of West Hollywood.