In 2009 when president-elect Barack Obama ordered a chili half-smoke at the famous Ben's Chili Bowl along U Street N.W., crowds flocked to the legendary eatery and the street it has anchored since 1958. U Street has gone through difficult times, particularly the lingering aftermath of devastating riots following the 1968 assassination of Dr. Martin Luther King, Jr. Today the street is pulsing again with the music, businesses and life that, in the early 1900s, distinguished it as the main street of Washington's "city within a city."

Seven blocks of U Street N.W. between 9th and 16th Streets N.W. 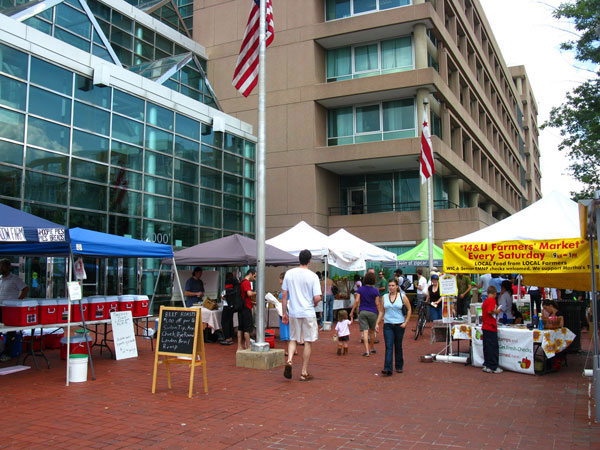 The Reeves Center (1986) was the cornerstone of redevelopment of the U Street corridor; the city invested $50 million and houses some city agencies there. The building set-back created an urban plaza, the site of a weekly farmers market and other events. Photo Flickr user thisisbossi, Creative Commons license.

In then-segregated Washington, U Street was an epicenter of African American businesses, entertainment, and civic and religious life. The street earned the nickname "Black Broadway" for the number of theaters and jazz clubs that attracted the country's top black musicians, including Duke Ellington, Ella Fitzgerald, Louis Armstrong, Nat "King" Cole, Pearl Bailey, and "Jelly Roll" Morton.

The street also was the site of buildings designed by several prominent, 20th century African American architects, including John Lankford, considered the "dean of black architecture."

Following World War II and the invalidation of the city's racially restrictive real estate covenants in 1948, the character of the street as the hub of the African American cultural and entertainment scene in Washington, D.C., changed. A long period of decline began, punctuated and accelerated by the 1968 shooting of Dr. King and subsequent rioting along U Street N.W., 14th Street N.W., and the surrounding area.

Recovery from the damage and subsequent disinvestment because of the riots did not take hold until the mid-1980s and early 1990s, with construction of the Reeves city government building, the U Street–Cardoza Metrorail station, and new housing as well as the opening of new businesses.

Today the street's vibrancy has returned. New and restored venues host a variety of musical styles. Restaurants and bars teem with crowds of all ages and backgrounds, and new and long-time residents mix at the farmers market or among striking historic buildings. Observes Jane Freundel Levey, director of heritage programs at Cultural Tourism DC: "14th and U ... [are] absolutely right now the epitome of the new multicultural America." 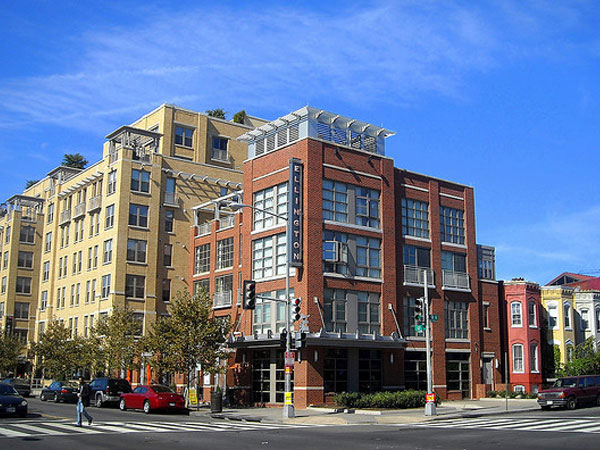 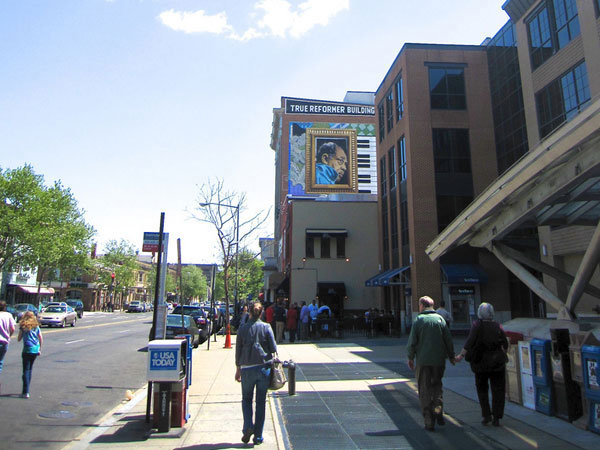 The Renaissance Revival style True Reformer Building (1902) pays homage to U Street's entertainment history with its Duke Ellington mural. In the foreground (right) is one of two entrances to the Metrorail station serving the street. Photo Flickr user tedeytan, under a Creative Commons license.