Monumental, grand, and expansive, Benjamin Franklin Parkway has changed the face of Philadelphia. Since it was conceived in 1871, the parkway has been an urban planning and architectural triumph, providing Philadelphia with one of the country's most iconic and acclaimed thoroughfares. Today, the parkway has evolved into an economic, educational, and cultural treasure, annually drawing more than 3 million visitors.

The entire boulevard starting from the east at 16th and Arch Street across from JFK Plaza (Love Park) and continuing northwest to the Philadelphia Museum of Art on Kelly Drive. 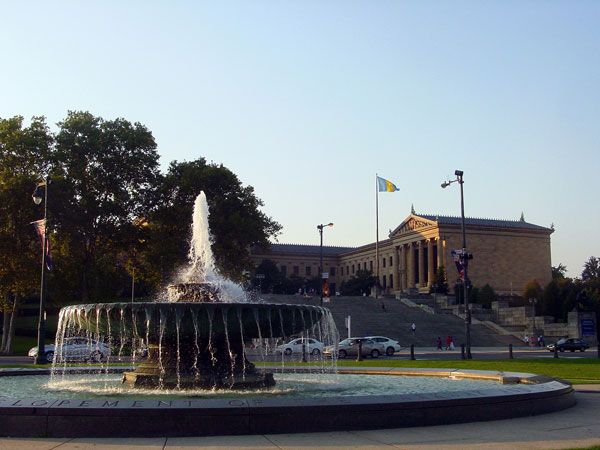 Benjamin Franklin Parkway is home to some of the most celebrated cultural and educational institutions in the country, including the Philadelphia Museum of Art. Flickr photo by Kansas Sebastian (CC BY-NC-ND 2.0).

Welcomed with praise and criticism by turn-of-the-century Philadelphians, implementation of the parkway was "a civic movement of international proportion." Inspired by the late 19th century City Beautiful movement, many residents began advocating for a broad boulevard to connect Philadelphia's business district with Fairmount Park. Since a boulevard on this order was not contemplated in William Penn's 17th century grid-street plan for the city, the new right-of-way would require numerous residences and businesses to be removed, instigating myriad social, political, economic, and legal battles. Nonetheless, Philadelphia's city council unanimously passed a bill in 1892 initiating the development of plans for the parkway.

Comparisons to the Champs-Élysées and references as "a little slice of Paris in Philadelphia" are not without merit. French architects Paul Cret and Jacques Greiber's worked separately on the street's plan, each calling for generous amounts of green space through the use of wide medians, parks and two large traffic circles. Eakins Oval was named after Philadelphia painter Thomas Eakins while Logan Circle was inspired by Paris's Place de La Concorde.

Since its completion in 1926, Benjamin Franklin Parkway has evolved into the city's "cultural mecca" with some of the nation's premier art galleries and educational institutions. The Fairmount Park Art Association, which provided the city's planning initiatives with tremendous support, facilitated the erection of the Franklin Institute, the Free Library of Philadelphia, and the Philadelphia Museum of Art — which anchors the parkway at its western end point. The Rodin Museum, containing the largest collection of Auguste Rodin's work outside of Paris, as well as the Barnes Foundation, an art institution featuring modernist painters from France, further emphasize the parkway's French influences.

The right-of-way also is a neighborhood where 20,000 apartment dwellers live, and a civic space that accommodated more than a million people during one of the Live 8 benefit concerts in 2005. 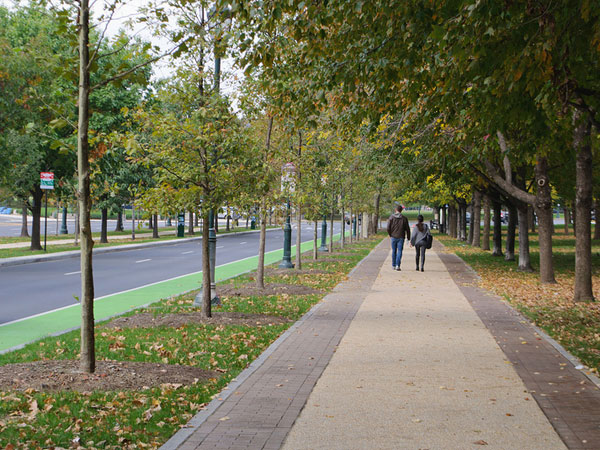 A couple walks along one of the many sidewalk lanes adjacent to Benjamin Franklin Parkway. The sidewalks are generously shaded and lit by trees and historic lighting. Photo courtesy InShappoWeTrust. 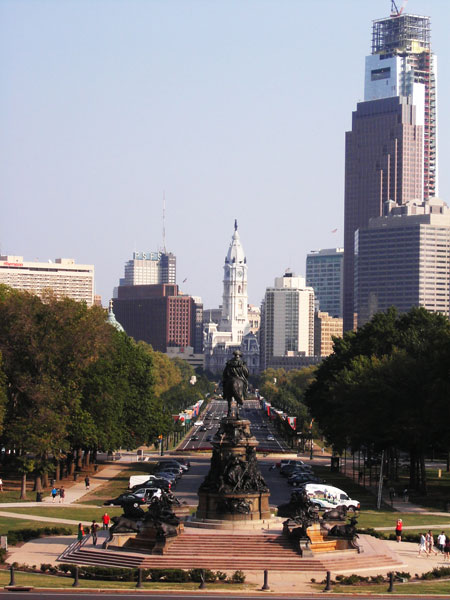 Inspired by the Champs-Elysees, Benjamin Franklin Parkway is incredibly expansive, stretching all the way from city hall to the Philadelphia Museum of Art. Photo by Flickr user camera_obscura [busy] (CC BY-NC 2.0).