With a gentle curve, Broadway juxtaposes picturesque Victorian architecture with the high and steep mountains that form the Lehigh River Valley.  The borough of Jim Thorpe, originally named Mauch Chunk, was a company town founded and built by Lehigh Coal and Navigation Company owners Josiah White and Erskine Hazard after anthracite coal was discovered in nearby Summit Hill in 1791.

Broadway encompasses a two block stretch from the intersection with U.S. Route 209 to Hill Road adjacent to the Mauch Chunk Opera House. 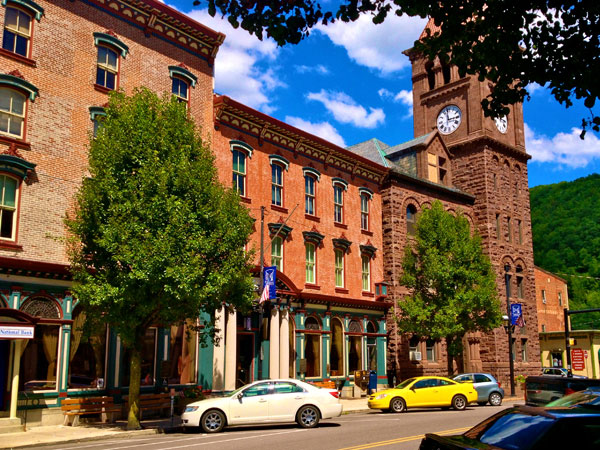 The Carbon County Courthouse, built in 1893, is a Richardson Romanesque building, and one of the many fine examples of Victorian design along Broadway. Photo courtesy Matthew Shulman.

By the mid-1800s the town was on the threshold of its most prosperous era, marked by an unprecedented building boom on Broadway by a handful of families who built a collection of expensive mansions later nicknamed "Millionaire's Row." Comprising an eclectic mix of architecture — from Italianate and Second Empire to Queen Anne, Romanesque, and Classical — the homes were accented by intricately detailed and colorfully ornamented porches, shutters, roofs, windows, and doors.

Alongside these homes with their delicate architectural features are other buildings on Broadway, such as the fortress-styled Carbon County prison, that reflect the grittier and more rebellious aspects of living in Jim Thorpe during the 19th century. This is where several hangings took place between 1877 and 1879. The executed persons who were convicted of murder — some argue they were innocent —belonged to the Molly Maguires, a secret society of coal miners.

By 1933 coal mining in the region came to an end, precipitating several decades of economic decline. The mansions of Millionaire's Row, although not torn down, fell into disrepair. Acting on a suggestion by a local newspaperman, residents pledged a nickel a week for five years in order to attract industry.  Ultimately they voted in 1954 to rename their town Jim Thorpe after the celebrated and widely known Olympic athlete.

Ever since it was founded, the town was threatened by flooding from Mauch Chunk Creek, which could inundate Broadway with water as high as the second floor of the Carbon County Courthouse.  To mitigate the flooding, a dam was constructed in 1972 — the same year Hurricane Agnes hit and brought enough rain that had the dam not been built, Broadway would have suffered $2 million in damages.

Since the downtown area of Jim Thorpe was added to the National Register of Historic Places in 1977, individual property owners have taken the initiative to restore many of Broadway's historic buildings, including the magnificent Inn at Jim Thorpe. Originally the New American Hotel, it was built by Cornelius Connor where his White Swan Hotel stood before it was destroyed by the town's 1849 great fire. 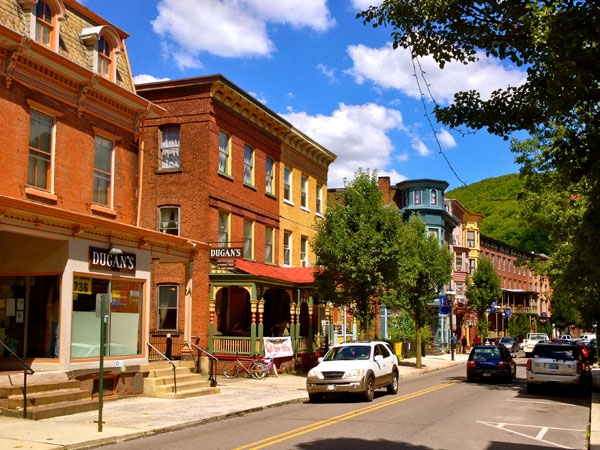 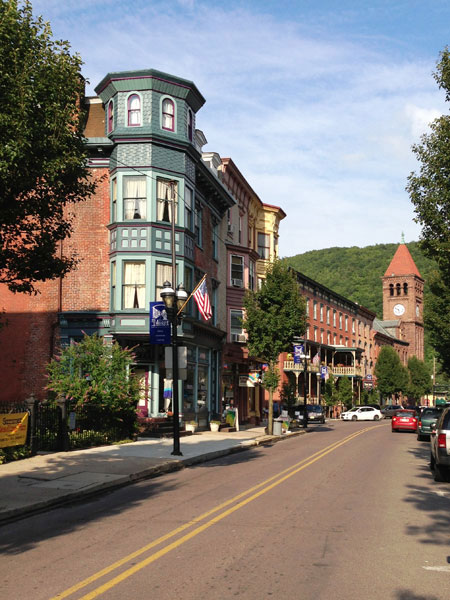 View of Lower Broadway with the newly restored McBride Building in the foreground and the clock tower of the Carbon County Courthouse in the background. Photo courtesy Elissa Garofalo.