Kalakaua Avenue is one of the most economically prosperous, yet environmentally vulnerable, streets in America. Located alongside the world-famous Waikiki beach, the street commands sweeping views of Diamond Head; provides the address for a number of the country's most opulent retailers; showcases a unique architectural fusion of Hawaiian, Gothic, Asian, Spanish, and Moorish designs; and is part of the repository of Hawaii's immense cultural heritage. 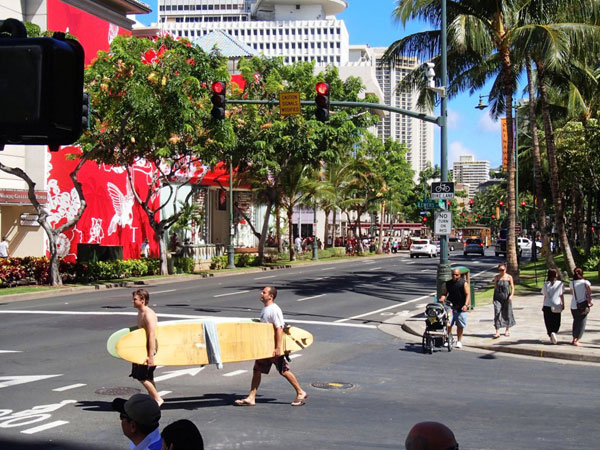 Surfers from Waikiki Beach at the intersection of Kalakaua and Lewers Avenue. Photo courtesy Paul Luersen.

With its overhead canopy of palms, Kalakaua is an avenue characterized by its constant movement and high energy. It is a place that brings together residents with out-of-state tourists and world travelers, those of wealth with those of more modest means. People come here to work, shop, eat, vacation, sunbathe, swim, surf, or take in any number of events throughout the year that transform Kalakaua into a thriving, urban gathering space.

Setting the stage for Kalakaua Avenue's tremendous success was construction of the Ala Wai Canal. Completed in 1928 after seven years of construction, it allowed the area's rice paddies and wetlands to be drained, which created Waikiki's expanse of developable land.

The high-rise hotel building boom along Kalakaua Avenue and Waikiki reached its peak during the late 1960s and early 1970s. In response, the city and county of Honolulu adopted a Waikiki Special Design District Ordinance in 1974 to restrict building heights and prevent the area from being overbuilt. To those who characterized the area as a "concrete wasteland," the damage was already done. Honolulu's new mayor, Eileen Anderson, responded with the "Waikiki 2000" plan in 1981. Despite her call for urgent action, the plan was not implemented. Honolulu's next mayor, Frank Fasi, guided the city through a high-profile planning process for Waikiki funded by the Queen Emma Foundation, a major land owner in the district.

The plan that resulted sought to make the experience of walking along Kalakaua Avenue "feel more like being in a park" rather than on a densely urbanized street, according to Honolulu Mayor Jeremy Harris who took office in 1994. During the next 10 years, the city and county would spend more than $100 million on Kalakaua Avenue for new sidewalks, landscaping, walkways, historic-style street lighting, street furnishings, and plazas. Also added was the Waikiki Historic Trail designed by native Hawaiian activist and historian George Kanahele. The trail's 23 sites, many of which are located on or within steps of Kalakaua Avenue, highlight Hawaiian culture and history.

Given the avenue's location between the Ko'olau Mountains and the Pacific Ocean, how the city and state address flooding in the Ala Wai watershed and sea level rise as a result of climate change will largely influence and shape the avenue's future. A plan under development by the U.S. Army Corps of Engineers is evaluating various options to protect Waikiki and Kalakaua Avenue from a 100-year flood.

In response to projected sea-level rise affecting not just Kalakaua Avenue and Waikiki but all coastal areas in Hawaii, the state is among the leaders in the U.S. establishing a framework that enables local governments to plan for and adapt to changes from climate change. Last year Governor Neil Abercrombie signed into law Senate Bill 2745 that amends the Hawaii State Planning Act to include priority guidelines addressing adaptation to climate change. The amendment recognizes that sea level rise in Hawaii will occur and that adaptation strategies must be adopted. The private sector also is responding. For example, the Kyo-ya Hotels and Resorts says the new, 300-foot-tall Diamond Head Tower hotel the firm is seeking approval to build next to Waikiki Beach will be constructed to withstand rising sea levels and other impacts caused by climate change. 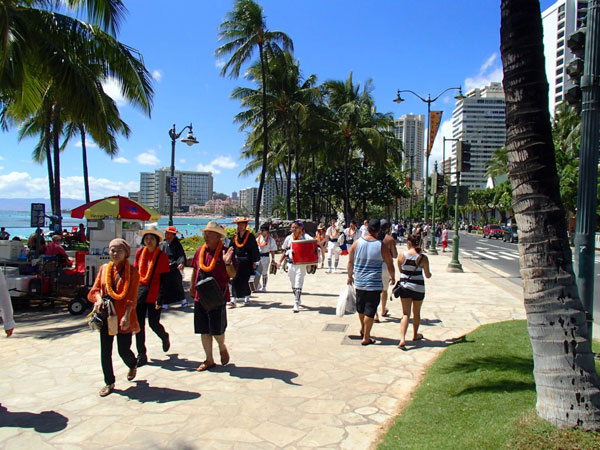 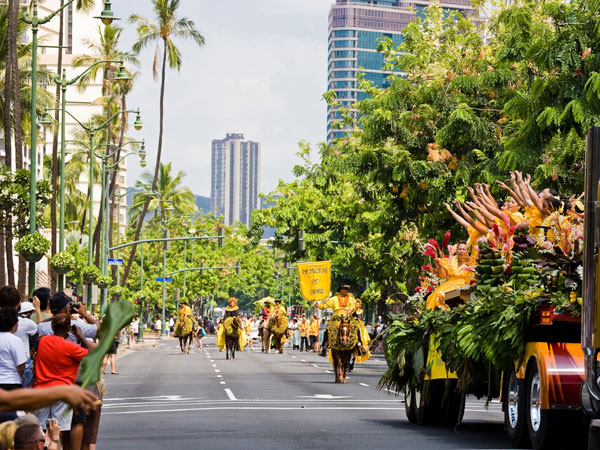