Fifth Street is the commercial centerpiece of the Oregon District — Dayton, Ohio's oldest neighborhood and the first listed on the National Register of Historic Places. Locally owned businesses are woven into the fabric of history along this street and have fostered a strong sense of community and place for those who spend time here. 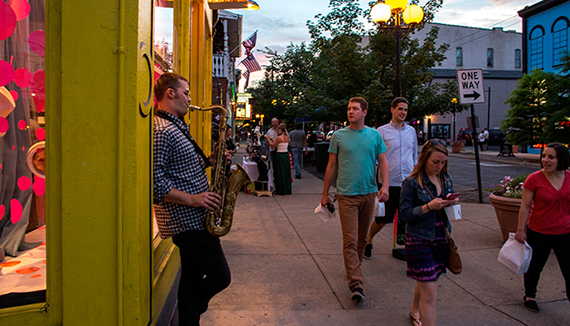 Fifth Street hosts a number of events throughout the year that bring in people from throughout the Dayton area. Photo Andrew Thompson, City of Dayton.

The first plat in the district was laid out in 1829, soon after the first boats arrived from Cincinnati on the newly opened Miami Canal. The canal provided a conduit for the neighborhood's German immigrants, who began arriving by the waterway in 1832. Some of the oldest existing homes in Dayton are modest brick structures constructed during the 1840s on Tecumseh Street. Larger homes constructed during the period 1850–1900 are located further east in the district.

After the Second World War, the Oregon neighborhood declined and properties fell into disrepair. Plans were drawn during the 1960s for a large-scale urban renewal project. If implemented, the project would have dramatically altered the character of the historic streets and resulted in the removal of historic homes and other buildings. The neighborhood was saved from urban renewal in large part by the efforts of preservation-minded residents who recognized the historic significance of the city's oldest neighborhoods.

The revival of the neighborhood began during early 1970s. Oregon was listed on the National Register of Historic Places in 1974 — a first for Dayton. Many of the old homes were restored and reoccupied, and commercial buildings along Fifth Street were rehabilitated. With its restored homes and businesses, the Oregon Historic District of the present day exemplifies preservation as a way to breathe new life into a neighborhood.

The Oregon Historic District includes restored homes of the Italianate, Eastlake, Flemish, and Victorian architectural styles popular during the period. A collection of 19th and early 20th century commercial buildings are mostly seen on Fifth Street.

Today, Fifth Street provides a stable foundation on which to expand efforts to increase vibrancy in the Central Business District and beyond. 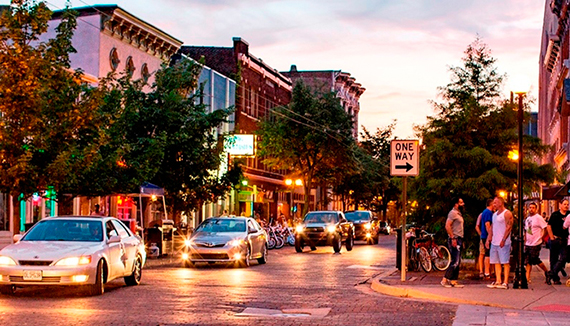 No matter the season, Fifth Street is bustling and vibrant day and night. Here, people are arriving for a night on the town. Photo Andrew Thompson, City of Dayton.

Fifth Street is the heart of Dayton's treasured Oregon District and is a focal point for the surrounding community as well as the city as a whole. 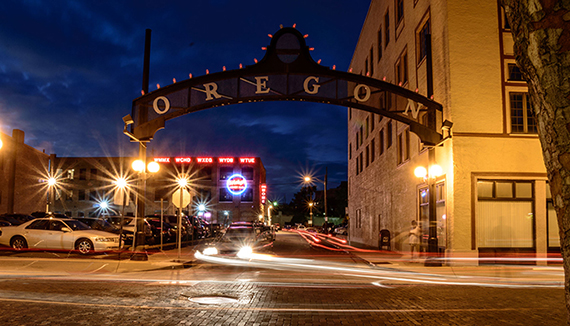 The metal gateway signifies that Fifth Street is at the heart of the Oregon District, a historic and bustling neighborhood in Dayton. Photo Tom Gilliam, City of Dayton.