At the heart of Asheville, North Carolina's downtown, Lexington Avenue serves as a creative corridor, something of a distilled version of the city itself.

It could almost be called Asheville's small entrepreneur or specialty shops district, offering an eclectic mix of more than 200 small businesses and shops ranging from fashionable retro boutiques to a brewpub. Izzy's Coffee Den and Dobra Tea offer shoppers respite, places to refresh and refuel with the city's distinctive laid back funky vibe. Tops for Shoes is a statewide shopping destination.

Lexington Avenue runs from the I-240 viaduct to Patton Avenue through downtown Asheville. 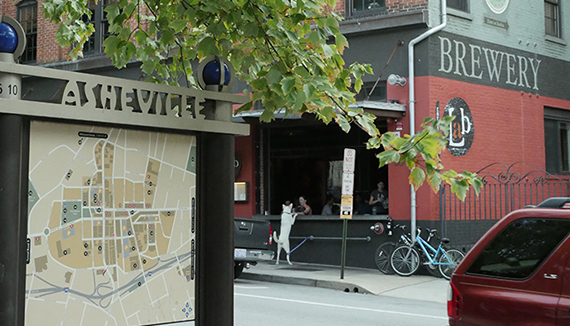 Along Lexington Avenue, old warehouses and offices have been converted into restaurants, bodegas, and galleries. There are freshly painted markers for shared roads and wayfinding signs to help people get around. Photo City of Asheville.

But there's more. In addition to Lexington Avenue Brewery (LAB), the stretch features two modern-day "speakeasies," Nightbell and Lex 18, both of which specialize in craft cocktails, including moonshine-laced concoctions. Unique independent restaurants fill the tapestry of the spaces in between.

Back to the shopping and the vibe of the street, it's a diverse offering: You can go antiquing at two shops, dive into a treasure trove of beads at Chevron Trading Co., or engage in a little retro vinyl music hunt at Voltage Records. Plus there's a bookstore.

At street level, Lexington Avenue is lined with beautiful brick sidewalks that are complemented by the street trees dotting this urban thoroughfare. The tree canopy helps to reduce heat in the summer months, curb pollution from stormwater runoff, provide habitat for birds in the city, and create a leafy downtown shopping experience. 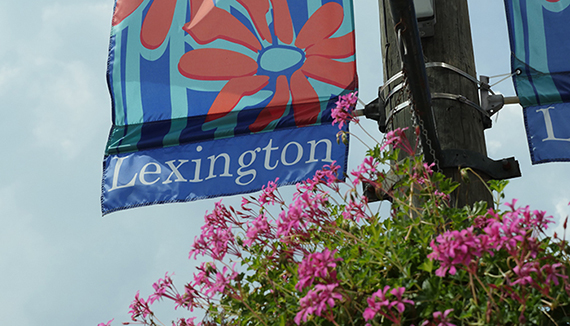 In the early 1980s, local activists fought to prevent much of Lexington Avenue from being razed to make way for a shopping mall. Now it is a reinvigorated and bustling center of local culture. Photo City of Asheville.

Lexington Avenue is a funky, creative, and delightfully unexpected home to a bustling music and arts scene that plays a crucial role in supporting Asheville's economy.

Two explorations of the history of failed mall development:

The Mall That Almost Ate Ashville

Asheville Just 'Happened' to Develop a Nice Downtown—or Did It?