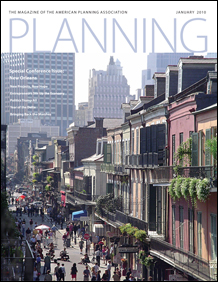 The Cranes Are Flying

Robert Becker on the key roles played by area planners.

After the Plan, the Code

APA kicks off a multiyear investigation of delta urbanism and coastal development. A sustainable communities story.

An interview with Rob Olshansky, author of a forthcoming APA book on New Orleans's recovery.

The politics of planning in a delta city, by Jed Horne.

Our regular feature on statistics in the news — compiled by APA's Research Department. This month: New Orleans.

Farming as a solution to the world's problems.