Desert dust may be robbing the Colorado River of five percent or more of its annual flow. That is the conclusion of a study summarized in the Proceedings of the Academy of Natural Sciences in September. The researchers who compiled the study were commenting on the giant volumes of windswept dirt from disturbed soils in Arizona, New Mexico, and Utah.

If corroborated by other research, the finding has significant implications for the 27 to 30 million people between San Diego and Denver who depend in part or whole on the heavily taxed river system.

The research began in 2002, when Thomas Painter, now affiliated with the University of California–Los Angeles and the California Institute of Technology, started studying dust deposition on snow in Colorado's San Juan Mountains. Because darker surfaces absorb more solar energy than white surfaces, dust-sprinkled snow melts more rapidly. Dust in a research area near the ski town of Telluride caused the snow to melt an average of three weeks faster, he found. But where did the dust come from?

Analyzing lake bed sediments in the same area, University of Colorado scientist Jason Neff found little fluctuation for most of the last 1,200 years, even during periods of drought. But in the 1800s — about the time that railroads, livestock grazing, and other settlement occurred in the Southwest — dust deposits increased 600 percent. Those heightened levels declined by about 20 percent after the 1930s, when federal controls on livestock grazing were instituted, but dust deposits were still five times what they were two centuries before.

In the most recent work, Painter and Jeffrey Deems, a researcher at the National Snow and Ice Center in Boulder, modeled the effect of dust on snow over the portions of Colorado, Wyoming, Utah, and New Mexico that contribute most of the water to the river. They concluded that runoff declined primarily because the plants on various mountain slopes were exposed to sunlight for longer periods each spring and therefore experienced an uptick in transpiration.

"It's a large chunk of water," says Brad Udall, executive director of the Western Water Assessment. Five percent amounts to 750,000 acre-feet. That's twice the water right owned by Las Vegas, about half of what gets drawn through the Central Arizona Project, and about twice what the city of Denver uses, he points out.

Udall notes that this finding is pushing some of the cities of the Southwest into action. Pinched by rapid population growth and what looks like rapidly rising temperatures, they have already begun studying their options. Las Vegas is boring a third and lower tunnel into Lake Mead, to be able to draw water if the reservoir, which went into this winter at just 42 percent of capacity, continues to decline.

However, the lower-basin states of Arizona, California, and Nevada have so far shown little interest in the dust-on-snow findings, says Eric Kuhn, general manager of the Colorado River Water Conservation District. "I have my doubts that it will ever get much traction," Kuhn adds. "My guess is that many will consider dust a problem without a real solution. What are the options, reducing recreation and development in the deserts?"

Best is a Colorado-based writer and regular contributor to Planning.

The use of certain sealcoats sprayed over miles of asphalt parking lots and driveways has increased the level of toxic pollutants in urban and suburban lakes, according to the U.S. Geological Survey. Coal-tar-based sealants contain polycyclic aromatic hydrocarbons, or PAHs, several of which are probable carcinogens and are toxic to aquatic life.

Boston — along with four other U.S. cities, two counties, and a development district — signed on in November to the Climate Resilient Communities program, an ICLEI-Local Governments for Sustainability program aimed at preparing for unavoidable climate impacts. The pilot includes the Adaptation Database and Planning Tool, which helps cities assess specific vulnerabilities, set goals, and create a plan.

Leafy trees suck up pollution up to four times faster than was previously believed, according to scientists at the National Center for Atmospheric Research. They say that the trees remove volatile organic compounds produced by power plants, cars, and even plants themselves to create ground-level ozone.

Colorado — where adult obesity has doubled since 1995 and one in four children is obese, according to the nonprofit LiveWell Colorado — is joining the movement to combat obesity with planning. The group recently released its Built Environment Blueprint, which offers healthful land use, transportation, and development recommendations for rural, resort, suburban, and urban communities. 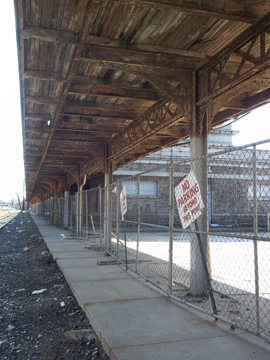 Expanded rail service in the Philadelphia region could come on the back of new highway tolls. Planning officials are working on a project, called 422 PLUS, that would toll U.S. Route 422, also known as the Benjamin Franklin Highway, to pay for passenger rail and needed upgrades to the outdated road.

The growth of greater Philadelphia is a classic case of suburban sprawl, with open space turned into housing developments and strip malls. Traffic on Route 422, a major thoroughfare connecting Philadelphia and its western suburbs, far exceeds capacity. To combat the problem, planners at the Delaware Valley Regional Planning Commission in 2010 developed a long-range land-use and transportation plan to control growth, provide new mass transit options, and preserve open space.

"The option for extending rail service is an important step," says Jerry Coyne, manager of transportation studies for DVRPC. "It provides a non-automobile way of traveling through the corridor and into Center City Philadelphia." There is no passenger rail in the Route 422 corridor now.

A key recommendation in the plan is a new 44-mile rail service connecting Norristown and Reading along the corridor. The project is expected to cost $500 million. Three counties have paid to study potential toll revenue on Route 422 and to assess public opinion on the project. It might be a tough sell — only one major toll road exists in Pennsylvania, and the money generated pays for the highway's continued maintenance.

Joseph Schwieterman, an urban transportation expert at DePaul University in Chicago, says that he knows of no other major city that currently uses toll revenue to fund road improvements and public transportation. "I think this is a really interesting concept," he adds.

Once transportation planners finish the toll revenue study, local officials will have to decide whether to begin work on the project or reject it outright, says Leo Bagley, a transportation planner with Montgomery County. To help move the project forward, DVRPC has launched a public relations campaign. Its centerpiece is a website, www.422plus.com, on which Bagley and other planners answer questions about the plan in a series of videos.

Planners consider this a last-gasp effort to upgrade Route 422, acknowledging that state and federal dollars for new projects are scarce. In the meantime, DVRPC is working with local municipalities to adopt the long-range plan, because any change in land-use laws must happen at the local level, Coyne explains. Communities along Route 422 will continue to expand as the desire to live and work in greater Philadelphia grows, he says.

"These are all great ideas, and very logical," Coyne says of the long-range plan. "There is a desire to promote and maintain the economy along with a managed level of growth."

Youker is a transportation reporter in suburban Philadelphia.

Smart Grid Gets a Bumpy Start in Boulder

When first announced in March 2008, SmartGridCity was said to be the world's most ambitious effort to revamp the century-old electrical grid. Xcel Energy chose Boulder, Colorado (pop. 100,000), a university town with a reputation for innovation, as a test case. Now, three years in, the project is plagued by soaring costs.

The main goal is to shave peak demand by allowing customers to better manage their energy consumption while optimizing the grid through real-time generation management and distribution controls. "If you can essentially reduce customer energy demand instead of building new power plants, you're saving money — and saving customers money," says Tom Henley, spokesman for Xcel Energy.

However, since the project began, Xcel's costs have tripled. Expenses ballooned to $45 million from $15 million because of unexpected software problems, glitches in laying a million feet of fiber-optic cable, and other problems. Total costs, including those of project partners, exceed $100 million. The Colorado Public Utilities Commission recently approved Xcel's request for authority to recoup costs from ratepayers, instead of sticking investors, but the take-home message seemed to be that smart-grid technology was prone to stumble.

The problem, according to Wade Troxell, associate dean of the engineering college at Colorado State University in Fort Collins, is that Xcel was unclear about what it hoped to achieve. He contends that Fort Collins's municipally owned smart-grid project, called FortZED, is a better approach. It is one of nine U.S. Department of Energy pilot projects.

FortZED — the ZED stands for zero energy district — aims to integrate locally generated electricity into the supply. Its advanced two-way communication allows heating, cooling, and other systems to throttle back during times of peak demand. In addition, FortZED is smaller (7,000 customers versus 23,000 targeted in Boulder) and less costly ($11.5 million, from federal and local sources).

Troxell argues that municipal utilities and cooperatives can more readily innovate. Regulated monopolies such as Xcel Energy "don't get any bonus points for thinking outside the box," he says. "They get their kudos for delivering good, reliable, and inexpensive energy."

A consortium of federal agencies led by the U.S. Department of Housing and Urban Development announced in October that 45 regions would receive a total of $100 ­million in grants to develop sustainable regional development plans.

These grants, part of the Obama administration's Partnership for Sustainable Communities, bring together HUD, the Department of Transportation, and the Environmental Protection Agency to build local economic competitiveness by connecting housing with good jobs, quality schools, and transportation options. The grant program,  designed in concert with local governments, set aside $26.5 million of the total award for small regions — fewer than 500,000 people — and for rural communities (populations under 200,000).

Two types of grants were awarded — those to update existing plans, and those to develop sustainability plans from scratch. A history of regional planning was not a guaranteed path to success. Noticeably absent from the list of awardees were Portland, Oregon — long the poster child for progressive regional planning — the Denver region, and Arizona's Maricopa Association of Governments. In contrast, Arizona's rural Apache County in the Four Corners region got an $820,500 award to jumpstart sustainability efforts there.

HUD Sustainable Communities Regional Planning Grants were given in two categories. Here are the five largest awards in each. Source: HUD.

Blanchard is an urban historian in Boise, Idaho.

Images: If rail service is established on the corridor, this former train station in downtown Reading would be used as a stop. Photo Darrin Youker.