The Wednesday after Hurricane Sandy hit, planner James Rausse, AICP, was back at work at his office in the Bronx. Rather than wait for a packed bus or fight snarled traffic, he made the trip from his home in Queens by bike. The trip took an hour — almost twice as long as his typical train ride — and the damage he saw consisted of fallen trees and ripped-up sidewalks. "I'm very grateful that we were able to avoid the worst of it," he said in a phone interview on November 2.

Elsewhere along the East Coast and in his own city, people have not been so lucky. Damage in his neighborhood "is nothing compared to neighborhoods like Breezy Point, Coney Island, City Island in the Bronx, Lower Manhattan, [and Staten Island]," says Rausse, who is the director of capital programs at the Office of the Bronx Borough President Ruben Diaz Jr. and president of the New York Metro Chapter of APA.

Rausse has been reaching out to his fellow planners via e-mail blasts, social media, the chapter website, and by phone since the storm hit October 29. He says that he made contact with his executive committee and others in New York City early, but news from APA colleagues on Long Island was slow to trickle in. A week after the storm, a Long Island colleague still reported limited access to water, electricity, heat, phone, Internet, and information about emergency services.

Meanwhile in New Jersey, Paul Gleitz, AICP, a principal park planner with the Monmouth County Parks System, is staying with his in-laws while he waits for the power to come back on at his house in Manasquan, a full week after Sandy hit. His office is dark, too, but he's working at one of the parks department warehouses — which is now doing duty as a temporary distribution center for supplies for storm victims.

On the ground, Gleitz sees Sandy's havoc all over the place: "50-foot dunes gone, homes and businesses filled with sand ... the ocean and Barnegat bay have met," he says, referring to the flooding of parts of the Barnegat Peninsula on the Jersey Shore. "The physical geography of the state is different."

What is so striking about this storm is the combination of its size, duration, and impact on human settlements, notes Gavin Smith, AICP, the executive director of the Center for the Study of Natural Hazards and Disasters at the University of North Carolina at Chapel Hill and the executive director of the U.S. Department of Homeland Security's Coastal Hazard Center. "In some ways, it's unprecedented in the U.S. for a coastal storm to impact this significant cluster of major metropolitan areas," he said in a November 1 podcast with James Schwab, AICP, a senior research associate at APA and manager of the APA Hazards Planning Research Center.

Smith adds that there will be intense pressure to rebuild quickly, but asks, "Should we be rebuilding our communities, our infrastructure, our housing differently? How can we inject risk reduction into our recovery process?"

Planners must do exactly that, says Ed Thomas, president of the Natural Hazard Mitigation Association. "There is no technical basis for thinking that Sandy is a fluke that will never happen again," he says. "We need to take this into account in our planning processes. Planners need to militantly insist that due regard for natural hazards be included in a comprehensive plan and any post-event planning process."

The New York Metro chapter's website notes that planning-related volunteer opportunities have not yet been identified but lists links to organizations serving immediate needs. "I've spoken with the state and with community development organizations, but it's still very early in terms of figuring out what to do," Rausse says. He notes that planning needs will include ecological restoration, infrastructure repair and planning, and community visioning, and he says that he hopes communities will coordinate efforts and take a regional approach.

It's not clear what kind of help is needed in New Jersey yet, either. "We're still very much in an assessment phase," said president of the New Jersey Chapter Chuck Latini, AICP, in an interview a week after Sandy hit. He notes that he has been in touch with planners at the state level as well as with colleagues in nearby states and at the APA. One thing he does realize is that "we're going to have to call on a lot of the expertise that was gained from Katrina; we're going to have similar issues," he says.

Rausse invites planners to help the region in any way they can. "This is probably the biggest natural disaster that we've seen, if not ever, then at least in the last 100 years or so." Any resources are appreciated, including donations to the Red Cross and to community development corporations, because he says the latter are "the ones who are going to be working with the neighborhoods and struggling municipalities in the long term."

APA members can get involved by donating to Post-Disaster Planning Efforts via the Planning Foundation and can keep tabs on planning needs and volunteer opportunities by following APA's Recovery News blog at http://blogs.planning.org/postdisaster.

The road to recovery will be a long one. "This is going to be a marathon, not a sprint," Rausse says.

On January 1, California becomes the first U.S. state to implement a "cap and trade" system for greenhouse gas emissions from large energy users. The first auction of emissions allowances occurred in November. Anticipated revenues of between $660 million and $3 billion must be spent on efforts to reduce GHGs; an October law requires that 25 percent go toward economically disadvantaged communities.

In September, new residential building permits were at their highest since July 2008, reaching a seasonally adjusted annual rate of 894,000 — a 45 percent increase over last September. The Census Bureau also reports that housing starts were up almost 35 percent for the same period. Home building might be on the rebound ...

But housing costs are still too high for many. A new report from the Center for Housing Policy and the Center for Neighborhood Technology found that the combined cost of housing and transportation in the largest 25 metro areas has swelled 44 percent since 2000, while income has grown only by a quarter. Hardest hit were Miamians, whose moderate-income households spend 72 percent of their income on housing and transportation.

Officials at the Northeast Ohio Regional Sewer District plan to start charging customers for stormwater service on January 1, despite an appeal filed by affected communities in the Cleveland area. A trial court has already ruled that the fee — approved in 2010 and based on a property's impervious surface area — is permissible and not a tax. It could bring in $35 million annually to maintain and build new infrastructure, says Frank Greenland, NEORSD's director of watershed programs.

Fifth graders from Miramar, Florida, combined education, imagination, and competition to build their city's future, one LEGO brick at a time, during National Community Planning Month in October. 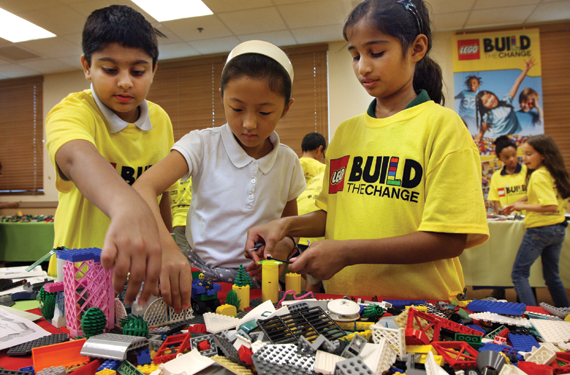 Soler is a freelance writer and photographer in Miaramar, Florida.

Bike Facilities Are Safe and Desirable

Cyclists will travel out of their way to use separated bike routes — and will reduce their chances of injury by doing so — according to two new studies.

Portland State University researchers attached GPS units to 164 bicyclists for several days each in a study recently published by Transportation Research Part A: Policy and Practice. Routes were then plotted on Portland's overall bicycle network, to determine those cyclists' route preferences for utilitarian trips.

The study found that, while cyclists often choose the shortest route, they also will select routes based on other factors. According to the Oregon Transportation Research and Education Consortium, the primary funder of the study, "cyclists take significant detours to use separated bike paths and bike boulevards."

The study weights types of facilities against distance, to create a matrix of trade-offs on route preference. Sure, a separated trail is nicer, but how much more distance will a bicyclist travel to use one? The study found that separated bike paths are equivalent to reducing trip distance by 26 percent, while bicycle boulevards (studied here for the first time) equate to a trip distance reduction of 17.9 percent. Cyclists are willing to detour 16.2 percent of their trip distance to avoid a left turn at an unsignalized intersection. 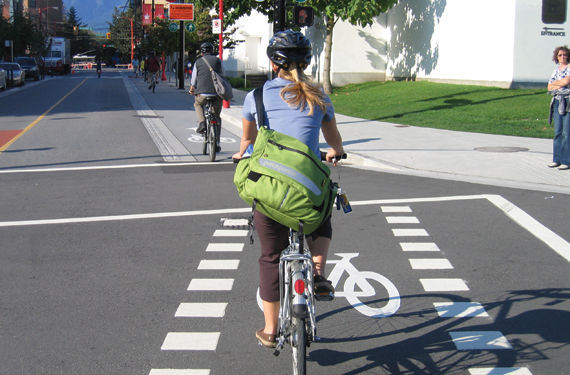 Already these data have been incorporated into Portland's bicycle trip planner and into the open source system OpenTripPlanner.

The other recent study, published online by the American Journal of Public Health, looks at safety. Researchers in Vancouver and Toronto recruited 690 local cyclists injured while biking, and compared infrastructure design at their injury sites to randomly selected control sites on those cyclists' same trips using something called a case-crossover study.

Most often used in health research, case-crossover studies consider subjects at two different points in time — as opposed to considering two different groups of people. In health research, such studies result in the classic "increased likelihood" percentages. This methodology is not typically applied to bicycling safety, but the general question is similar: How much more likely is a cyclist to be injured on, say, a cycle track versus a typical roadway?

The researchers found that cycle tracks had the lowest risk of all considered facilities — about one-ninth the risk of the control: a high-volume roadway with parking. Major streets were safer without parked cars (0.63 risk factor, where the control is 1.0). Bicycle lanes and local streets were about twice as safe (0.54 and 0.51 risk factors, respectively). Several factors reduced bicyclist safety: Streetcars and trains tripled risk, while downhill grades and construction also were more hazardous.

Arvidson is a Minneapolis-based writer and a fellow of the American Society of Landscape Architects. He wrote about state-of-the-art bicycle facilities in the May/June issue of Planning.