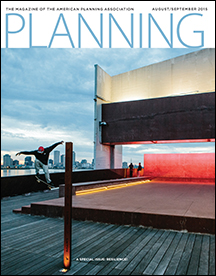 A Rising Tide of Engagement

The profession leans in on climate change: a report and commentary by James Schwab.

Preparing for the Next Big One

Jon Davis describes places that put "resilience" in their future. With a sidebar by Stephan Schmidt.

When Man Makes the Disaster

In New Zealand, collaboration is key. By William Siembieda and Laurie Johnson.

Back in Time in the Philippines — and Forward

The nation is struggling after a series of typhoons. Isabel Cañete-Medina visits her home country.