What do leading solar communities have in common? It may not be what you expect.

The Ivey family farm hadn't produced a crop since 1950. When the family sought to put the Walton County, Georgia, land to use again, they didn't want it to become a sprawling subdivision or feedlot. Instead, the family wanted a productive use that was compatible with the rural community and neighboring family farms. So they decided to harvest solar energy.

"Discussions centered on this solar farm as a type of farming that would be a low-impact part of a family farm," says Walton County Planning and Development Director Mike Martin. "The land owners saw this as a better option than 130 acres of houses or agribusiness. It really has worked out."

The resulting 30-megawatt Simon Solar farm near Social Circle, Georgia (pop. 4,358), about 45 miles east of Atlanta, made Walton County the leading community in solar energy generation in Georgia. Walton County generates about 10 times more solar power than Atlanta, and all the power from Simon Solar is purchased by Georgia Power.

Like many other communities that lead their state in solar energy generation, Walton County had no land-use or zoning mechanism to allow for a solar farm when the idea first surfaced. Yet the county worked to accommodate the solar farm development, in this case by establishing a new agribusiness zoning category that includes solar farms as well as uses like chicken houses and greenhouses. The county also altered its code to allow for residential rooftop and ground-mounted photovoltaic installations.

The Walton Electric Membership Corporation completed a six-acre, one-MW community solar farm this year under the county's new agribusiness zoning designation, with shares of the facility quickly selling out. The Simon Solar farm development increased community awareness and caused this second project to be well received. "People saw solar farms as not a bad neighbor to have," says Martin. 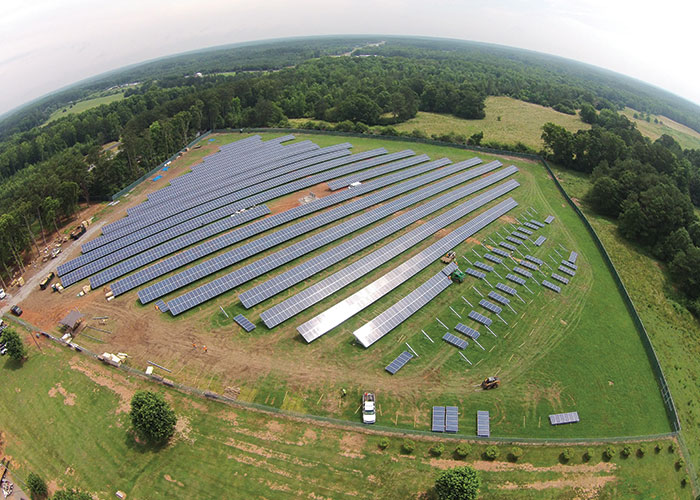 Walton County exemplifies the U.S. Department of Energy's National Renewable Energy Laboratory research finding that the communities generating the most solar energy per capita are smaller and less urban places that have worked to facilitate the development of community-scale solar. Additionally, while one might expect wealthy or well-educated communities to lead in this arena, NREL's analysis disproved this common assumption.

State decision makers can use policy to require increased use of renewable energy resources. But what can local governments and planners do to increase solar energy generation within their communities? Local governments, lacking information on the most effective strategies to increase renewable energy, may be tempted to leave solar energy considerations to state decision makers and individual home owners.

Researchers at NREL set out to determine commonalities among communities that lead their state in solar energy generation in order to help inform local governments and planners.

NREL compiled cumulative solar installation data through the end of 2014 from state sources and the U.S. Department of the Treasury, and sought out population, land area, education, and income data from the U.S. Census Bureau. Because each state's policy context and solar resource differs significantly, communities were compared only with other communities within their state. Population groups were defined as: Small: <20,000, Medium: 20,000–75,000, and Large: >75,000. Data was collected for six states and more than 2,300 communities where comprehensive installation data was available.

As one might expect, larger cities have more solar installations and generate more solar energy on average than small communities.

On a per capita basis, however, the numbers tell a different story. In each state studied, on average, small communities generate more solar energy per person than larger cities. 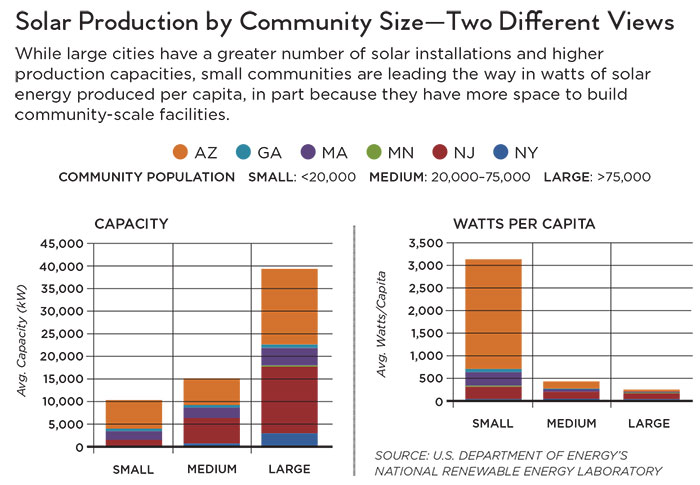 Why? On average, small communities in the six states examined have fewer, larger solar installations than large cities. All of the top 50 solar-energy generating communities in Massachusetts have at least one system 500 kilowatts or larger. These are most often ground-mounted systems that span multiple acres, many of them connected directly to the electrical grid, rather than generating energy for on-site consumption. Smaller communities generally have more land available and at lower costs than cities, enabling them to site larger, community-scale facilities that can provide energy to a greater portion of their population.

Back to the wealth assumption that the NREL data debunked: Communities leading their state in total solar energy generation or installed watts per capita were, on average, at or slightly below state income and education averages. 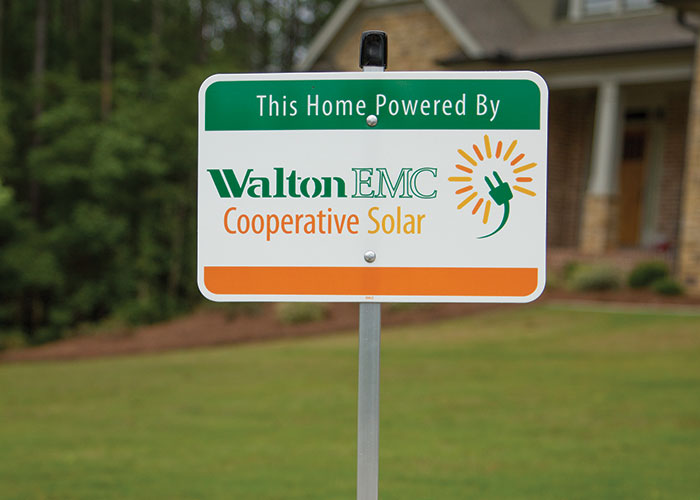 Next, NREL looked at communities with local-level codes, development regulations, and comprehensive plans that address solar and compared that with the number and capacity of solar installations within those communities to get at the impact of such policies on solar development. Data sources included APA's SolarOPs solar planning and zoning data, the Database of State Incentives for Renewables & Efficiency, and NREL policy research.

The most common local policies expressly addressing solar were development regulations, followed by comprehensive plans, and then sustainability, climate, or energy plans.

Many communities lack the mechanisms to allow for ground-mounted, primary-use solar installations in their land-use and zoning regulations when the initial prospect of a solar farm arises. But in the leading solar communities interviewed as part of this analysis, planners and elected officials acted fast, enacting necessary code provisions within a year.

Meriwether County, Georgia (pop. 21,298), had no provision for solar in its code when developers approached it seeking to build a three-MW solar farm next to an electrical substation.

"We did everything we could do to let them locate there," says Ron Garrett, the county's building and zoning director. "We know solar energy is one of the alternatives to fossil fuel and the big push by Georgia Power for solar is just all part of going green. The solar farm brings a lot of property tax revenue to the county and has no adverse side effects like pollution, noise, or traffic," he says.

Indeed, each community interviewed found solar farms to be a low-impact land use that generates additional tax revenue without placing a burden on public services.

Regardless of a community's size, wealth, or solar resource (i.e., the same PV system would generate about 25 percent more electricity in Phoenix than it would in Minneapolis), there are local actions that tend to increase solar energy generation.

Solar-Powered Cities offset city electricity use with rooftop PV as well as solar farms, which was the approach in Dartmouth, Massachusetts (see sidebar).

NREL's research finds that increasing local solar energy generation need not depend on wealthy residents or deep subsidies. Local solar leadership is instead achieved by eliminating barriers to solar installations of all sizes and actively supporting community-scale solar.

Megan Day is a project leader in the policy and technical assistance group at NREL in Golden, Colorado. She thanks APA; APA Senior Research Associate David Morley, AICP; the U.S. Treasury Department; Southface; the Minnesota Department of Commerce; and colleagues at NREL for their contributions to this research. This research and article was made possible with support from the Department of Energy's SunShot Initiative.

The SunShot Solar Outreach Partnership, a U.S. Department of Energy initiative led by APA with other partners, includes a number of free resources, including the SolarOPs Solar Planning & Zoning database, the PAS Report Planning for Solar Energy, a webinar, briefing papers, and more: www.planning.org/research/solar

A Guide to Community Solar: www.nrel.gov/docs/fy11osti/49930.pdf