We Own This City

When planner Mike Lydon pursued a notion in 2010 that had yet to have a name, he probably sensed he was onto something new in placemaking. According to the planning blog Planetizen, he was right. By early 2012 Planetizen posted tactical urbanism at the top of its annual listing of new planning trends, and Lydon was already globetrotting from his Brooklyn, New York, consulting firm, Street Plans Collaborative, to as far afield as Christchurch, New Zealand, as the unofficial spokesperson for tactical urbanism.

Tactical urbanism is a movement "that is owned by no one and can involve anyone," Lydon said in an interview. "A key motivation is to slice through the red tape of the conventional planning and building process. It's about getting the basic elements on the ground quickly and cheaply, even if at times doing so goes outside the system. Let's try something and see how it works. If it doesn't, try it a different way or go back to square one."

Lydon emphasizes tactical urbanism's special appeal to Millennials, partly because of the huge role social media has played in its success, and partly because so many city-living Millennials are restless with the slow pace of change. Tactical urbanism projects deal with publicly used spaces, even if privately owned, and they can be easily identified by such catchy monikers as Intersection Repair, DIY Crosswalks, DIY Bike Lanes, Open Streets, Build a Better Block, Walk [Your City], Pop-Up Retail, and Pop-Up Plazas; some of these are the names of organizations dedicated to spreading the gospel of tactical urbanism.

Examples in the U.S. vary from a small parking lot conversion in Somerville, Massachusetts, to the "living plaza" initiative adjoining the monolithic Dallas city hall, and everything in between.

Tactical urbanism interventions can legitimately occur anywhere along what Lydon calls a "tactical spectrum." After failed attempts to enlist the help of local officials, Anthony Cardenas took matters into his own hands early one morning in May 2013, when he painted a badly needed crosswalk at a dangerous, unmarked intersection near his home in Vallejo, California. His harmless act of civic defiance and others like it illustrate "guerilla" maneuvers, and they fall at one end of the spectrum.

Eventually, the county removed Cardenas's paint and repainted the crosswalk itself.

At the other end are "sanctioned" interventions. These are often driven by the public sector but use the same implementation techniques. Perhaps the most remarkable example has been the redesign of Times Square in Midtown Manhattan, one of several publicly led initiatives during the administration of former Mayor Michael Bloomberg that have radically transformed the streetscape of the Big Apple. After five years of tweaking, reinvestment, and evaluations, Times Square today is a place where pedestrians and cyclists have parity with motorized vehicles, retail sales volume has increased dramatically, and traffic congestion has been kept within reasonable limits.

"The bottom line," says Lydon, "is to bring projects to life that may have been dormant, dysfunctional, or simply ignored — and once that is achieved, to figure out how to make them work on a permanent basis." 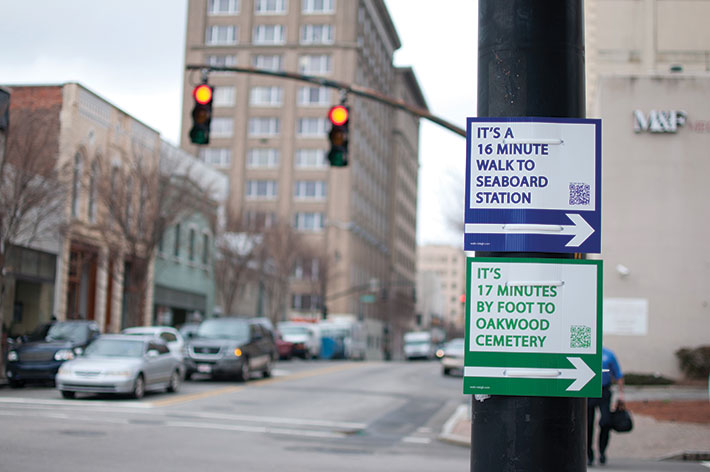 With proper planning and a dose of good luck, guerilla tactics can become mainstream. Under cover of darkness in early January 2012, 27 pedestrian wayfinding signs pointing to landmark destinations suddenly popped up at street intersections in Raleigh, North Carolina.

Matt Tomasulo, at that time a graduate student in urban planning and landscape architecture at the UNC Chapel Hill and North Carolina State University, dreamed up the idea and organized the installation (it took only an hour for three people to install). According to Tomasulo, Walk Raleigh came about "because routes considered easily walkable in other cities were, by force of habit, car-dependent in Raleigh. Walk Raleigh is a simple, strategic wayfinding system that helps people discover how easy it is to get around without a car." 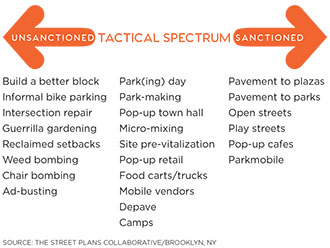 Tomasulo chose the intersections in part to reach out to a variety of different people — young and old, students and professionals. Small, corrugated plastic placards printed with vinyl decals were securely strapped to existing light poles using cheap industrial zip ties (easily removable to avoid charges of vandalism). QR codes on each sign linked any pedestrian with a smartphone to a recommended destination. Each route was measured in minutes to a nearby destination via Google Maps. A Facebook page and Twitter account provided a platform for community dialogue, feedback, and interaction.

To Tomasulo's surprise, the Atlantic Cities blog, NPR, the Washington Post, and the BBC publicized these guerrilla tactics. Then came numerous inquiries from other cities asking how they could make similar signs. So Tomasulo seized this unexpected opportunity by launching an open source website called Walk [Your City] with Kickstarter funding. The website allows anyone to recreate walkability maps using the Raleigh sample as their template.

Mitchell Silver, FAICP, who at that time was Raleigh's planning director and the president of APA — he is now the commissioner of the New York City Department of Parks and Recreation — took the lead in rallying for city council's unanimous approval of Walk Raleigh as a pilot project in concert with the Raleigh 2030 Comprehensive Plan. "[Tomasulo] is thinking big to solve emerging problems and really provide a public service," remarked Silver shortly after installation. "He really symbolizes the next generation of planners."

Last year Blue Cross and Blue Shield of North Carolina inked a deal with Walk [Your City] as a community wellness program; it is now offering it to some municipal customers as a value-added service. Earlier this spring WYC received a $182,000 grant from the Knight Foundation to complete a DIY walkability toolkit in partnership with Lexington, Kentucky, and San Jose, California. 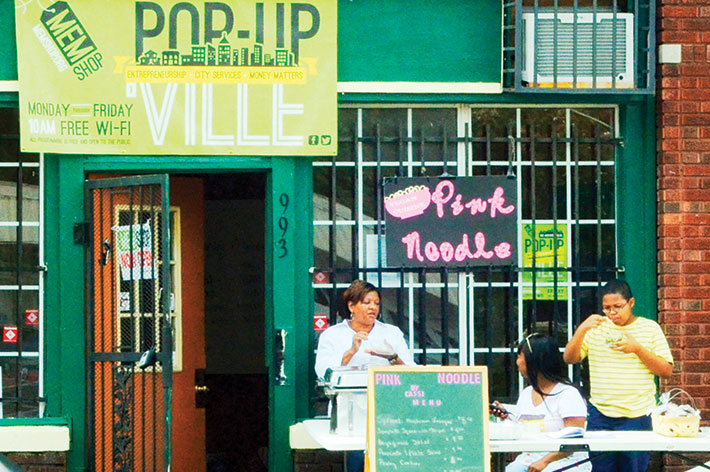 Like many U.S. cities, Memphis has been plagued for decades by neighborhood disinvestment, suburban flight, and dwindling city revenues. In 2012, this challenge led Mayor AC Wharton to consider tactical strategies to spur reinvestment and kick-start targeted revitalization.

Wharton wanted city staff to view neighborhood activism as a positive factor for change, and to see that many smaller investments were preferable to a few large-scale investments. He believed that incremental, tactical projects could seed economic growth and innovation.

"A New Face for an Old Broad" to some extent served as a model for the mayor. It began as a weekend event held in 2010 along a three-block stretch of Broad Avenue, bordered on one side by warehouse buildings, parking lots, and a water tower, and on the other side by a smattering of commercial storefronts at various levels of upkeep. With the help of local businesses and foundations, a series of quick and cheap improvements were put into place.

Volunteers helped to temporarily restripe and narrow the streets, paint crosswalks and bike lanes, and clean up vacant storefronts. Temporary pop-up shops and restaurants were brought in on a short-term, experimental basis. Cafe seating appeared on the sidewalks, and a vacant parking lot became a skateboard park.

NFOB attracted double the expected turnout. Of greater significance, however, are the long-term benefits. A $350,000 ArtPlace America Grant helped the Binghampton Development Corporation and the Historic Broad Business Association to build a performance and event space at the water tower pavilion. Property sale prices and rents have continued to increase along Broad as more new businesses have moved in. Nineteen blighted properties have been reclaimed, and 32 new and renovated properties have been built. All shops are now occupied. Earlier this year, a developer unveiled plans to convert one of the warehouses into multiuse tenant space.

All told, more than $20 million has been invested in the Broad Avenue corridor since NFOB. According to planner Tommy Pacello, formerly project manager of the Mayor's Innovation Delivery Team in Memphis, "what happened with NFOB was that neighborhood interests began to take matters into their own hands and demand better from themselves and from the city. The trick is it didn't stop with the event."

Having learned from NFOB, the city has empowered several other neighborhoods to bring in new investment under its programs MEMFix, MEMShop, and MEMMobile. MEMFix attempts to transform city blocks into temporary community gathering places — through pop-up shops, marketplaces, and painting projects, or by improving street design to increase walkability and biking. The Crosstown, South Memphis, University District, and Edge neighborhoods have all hosted successful MEMFix events.

MEMShop provides businesses with free or reduced rent in vacant or underused spaces for up to six months, along with a heavy dose of direct business assistance, and MEMMobile has introduced a forgivable loan program to start a mobile business, such as a bike shop and a vintage clothing boutique. 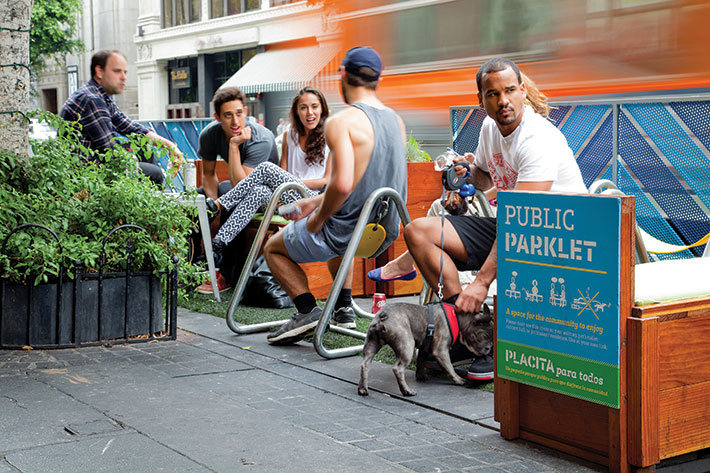 In Los Angeles, tactical urbanism is still a work in progress. With the support of Mayor Eric Garcetti and the city council and in response to community interest, the Los Angeles Department of Transportation launched a three-part streetscape program in 2014. "People St" expedites pilot projects quickly in places in the city that are in need of small-scale solutions.

Bike corrals require removing up to three spaces of curbside parking and are intended to satisfy a demand for bike racks in places where the sidewalk space is limited.

To build parklets, LADOT allows conversions of curbside parking to decked seating and gathering spots. Otherwise known as "sidewalk extensions," "cafe seating," or landscaped "lounges," parklets can take up to two weeks to install, and are especially good adjacent to restaurants or coffee houses.

Street-to-plaza conversions typically occur when short street segments on which vehicular traffic is negligible are converted into pedestrian-only realms. In all instances, pilot projects are temporary; if not successful by the end of their first year, the street space reverts to its previous traffic function.

What makes the LADOT process unique is its reliance on a detailed "kit of parts" available on the LADOT website. For parklets these consist of architectural drawings and specifications for seat walls, planter boxes, deck materials, signage, furnishings, and all other components. Chemically treated fertilizers are prohibited, and all plantings must be native, noninvasive, and drought resistant; a suggested plant list is provided.

LADOT estimates that parklets cost from $35,000 to $64,000, which can be a formidable amount since the city provides no funding for construction. Neighborhood groups apply on a competitive basis once they have selected their preferred location, then LADOT works with them to choose and adapt their project to the kit of parts. For both parklets and plazas, community partners must have liability insurance and provide ongoing maintenance.

Temporary plaza conversions include decoratively painted street pavement in accordance with the bold patterns and colors featured in the kit of parts; preapproved vendors for tables, chairs, and other plaza components are also listed. Applicants must sponsor, promote, and manage programmed activities or special events during the year-long trial period.

The highly successful Sunset Triangle Plaza, completed in 2012, preceded the People St program, but is to some extent its model. STP has become a popular informal gathering spot and is currently being considered for permanent use. Neighborhood groups have hosted summer movie nights in the plaza, and the neighborhood farmers market has relocated there from a nearby location.

Is tactical urbanism here to stay, or just a passing fad? Mike Lydon concedes that "the planning process is not going to be replaced by tactical urbanism. But doing things quickly, incrementally, and cheaply, rather than having them sit on the shelf awaiting a multimillion dollar funding stream, can be a compelling means of citizen-based empowerment and a valuable placemaking tool."