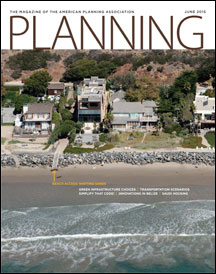 A Line in the Sand

Heather Boerner explains what happens when the boundaries between private property and public space get washed away. Sidebars by Jeff Gove and John Tibbetts.

Going beyond stormwater systems to include roads, parks, and more. Rebecca Leonard surveys the scene in Planning Practice.

The need and the strategies are surprisingly large scale. Chuck Ware offers a first-person account.

A 'Blue Economy' for Belize

Out of the Box, Into the Scenario

Daniel Haake makes sense of the powerful tool being used to address our economic future.

Driving longer — or not at all. Debbie Sullivan Reslock sorts through the choices.

Randall Arendt reports that "lighter" form-based codes and design standards work, in an adaptation from the second edition of Rural by Design.